3 Practical Solutions for the 2022 Federal Budget

UnitingCare Australia is the national body for the Uniting Church’s community services network and is an agency of the Assembly of the Uniting Church in Australia. We give voice to the Uniting Church’s commitment to social justice through advocacy and by strengthening community service provision. We are the largest network of social service providers in Australia, with 50,000 staff, 30,000 volunteers, supporting 1.4 million people every year across urban, rural and remote communities. We focus on articulating and meeting the needs of people at all stages of life and those that are most vulnerable.

UnitingCare Australia has four policy priority areas: addressing economic inequality, justice for First Peoples, ageing to our full potential and responding to the Disability Royal Commission. This submission to the 2022 Federal Budget is specifically focused on economic inequality and ageing. It reflects our deep concern for the growing number of people in our community who are struggling to survive on unacceptably low wages or income support and the growing workforce crisis in aged care.

Inequality is worse than we think

Aspirations for shared prosperity in Australia are unravelling under the sustained, twin trends of weak wage growth and rising asset prices.

When it comes to wealth in the modern era, our standing at birth has never been more important, while our skills and effort at work have never been less important. Over the past 10 years, ASX500 and property investments have provided strong average annual returns. Leading ASX indicators averaged around 9.5 per cent total annual return through the decade. ABS price of residential dwellings index averages around 5.5 per cent growth annually, before any income is collected for rent. Over the same period wage growth sat around 2.5 per cent.

There is a chasm, even within the middle class

Households at the bottom 10 per cent had less than one thirtieth the wealth of uppermiddle class households in 2017. This was after the gap between these households had widened by almost 80 per cent since 2013. During this period, households on the maroon line actually lost wealth. Government action is essential, substantive policy reform needs to be implemented if we want to see a different outcome. 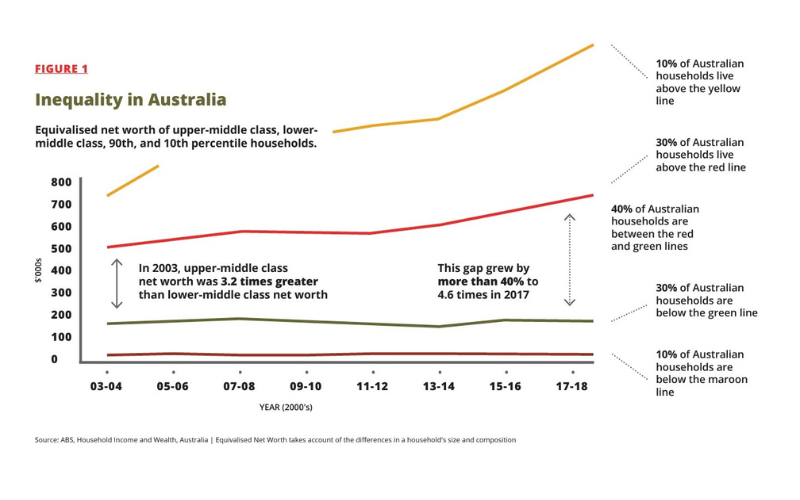 Inequality is bad for everyone

Reducing inequality would make a difference in two main ways:

Economic studies show income inequality has a negative impact on growth. More specifically, a bigger gap between low-income households and the rest of the population has a bigger negative impact on economic growth. Limits on spending for low-income households reduces demand for business and stops people from making worthwhile investments in their own future, such as education. Finally, inequality produces instability. So demand for workers during busy times is drastically different to demand for workers during slow times. The problem is, this means there are almost always more people that can’t get a job than there should be. This keeps wages low and is partly the result of the low rate of JobSeeker and related payments.

UnitingCare Australia proposes the following 3 policy reforms that will go some way to addressing inequality in Australia and ensuring that everyone has an adequate income or support to live a decent life: 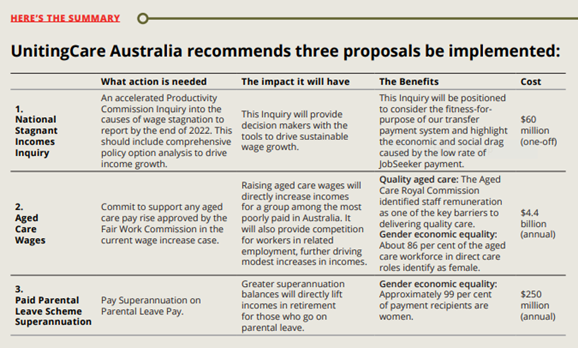 UnitingCare Australia recognises that a complex range of economic issues have kept wage growth low over the past ten years, and calls on the Government to undertake an accelerated Productivity Commission Inquiry into these causes and policy options.

An accelerated Productivity Commission Inquiry into the causes of wage stagnation to report by the end of 2022. This Inquiry should include comprehensive policy option analysis to drive income growth.

This policy is a pivotal step toward ensuring Australian households have sufficient income to live with dignity and that economic resources are distributed in a just way. This Inquiry will provide decision makers with the tools to drive sustainable wage growth. This Inquiry will also consider the transfer payment system and highlight the economic drag caused by our indefensibly low JobSeeker payment.

A review of this kind will cost less than $60 million, which is value for money given the benefits it could provide for millions of Australians.

The Royal Commission in Aged Care Quality and Safety identified low wages in the aged care sector as a key barrier to providing high quality aged care. Over the past two years in particular the workforce crisis in aged care has escalated significantly and poses a real and present threat to the continued operations of the sector.

Aged care workers are the lowest paid caring workforce and yet are doing some of the most important work in the nation, supporting our ageing and aged citizens.

Commit to support any aged care pay rise approved by the Fair Work Commission in the current wage increase case.

Raising aged care wages will directly increase incomes for some of the most poorly paid workers in Australia. It will also provide competition for workers in related employment, further driving modest increases in incomes for low-income households.

Paying superannuation on Parental Leave Pay will be a small but significant step toward economic equality, especially gender equality amongst older Australians.

The government payment is means tested with people earning less than $150,000 qualifying for the payment at minimum wage.

Superannuation is not paid on top of this payment which means there is a gap in the accumulation of superannuation for this group, 99 per cent of whom are women.

Paying superannuation on top of the government’s Parental Leave Pay.

Greater superannuation balances will directly lift incomes in retirement for those who take parental leave, particularly women. Today women retire with 42 per cent less superannuation than men. The severe disadvantage experienced by women in retirement was first highlighted by UnitingCare Australia commissioned NATSEM research in 2001². At last review, 99.4 per cent of Parental Leave Pay were women³.